From ABC to XYZ of Issued Shares vs Outstanding Shares

Confused? Don’t worry. The whole article is going to be a guide on issued shares vs outstanding shares and other closely related topics.

So, doesn’t it make sense to know the whole concept and to start from the start? And by the end of the topic, your question about issued shares vs outstanding shares will get cleared.

Take a look at this diagram: 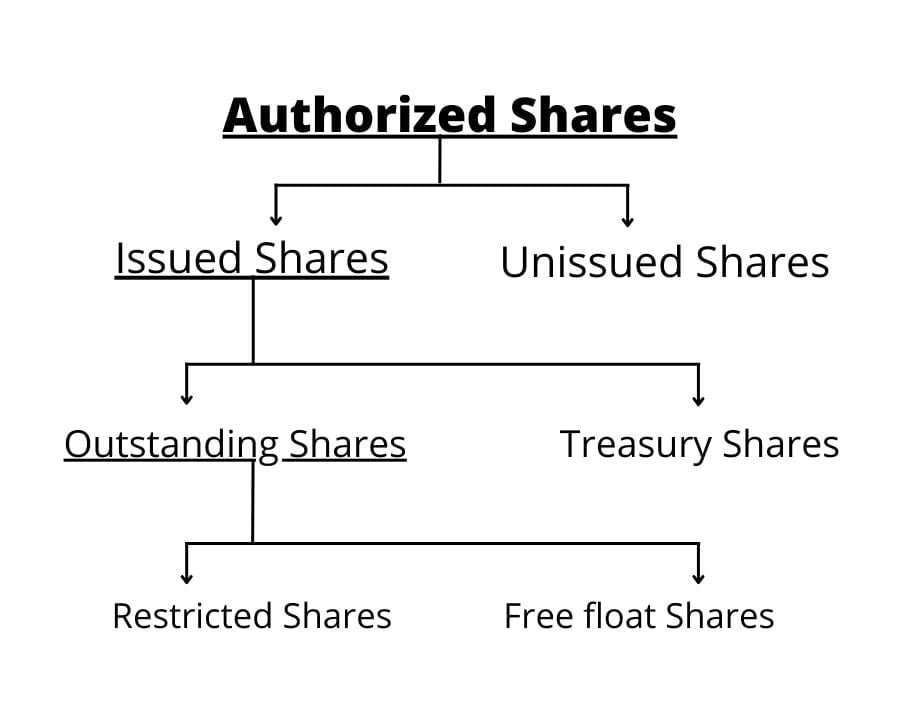 The maximum number of shares that a company can issue in its whole lifetime is known as authorized shares. The promoters decide on this number and mention it in the company’s MOA (Memorandum of Association) at the start of the company.

Owners of the company can increase the number of authorized shares later by taking the approval of the shareholders.

Authorized shares consist of both equity and preference shares.

If the company wants, it can issue all the shares to the investors but companies don’t do it while issuing shares via IPO, FPO, Rights Issue etc. They issue a part of authorized shares and the number of shares the company issue is known as Issued Shares.

The shares were issued to the public, meaning there would be investors who bought these shares. These investors can be promoters, angel investors, venture capital, retail investors like us, high net worth individuals, and other investors including institutional investors like mutual fund houses, insurance companies, pension funds, etc.

Companies keep the shares unissued for future issuance. Say, a company wants capital but doesn’t want to raise it through debt funding. Then what? The only way remains is equity funding and it will happen by issuing the unissued shares.

Treasury shares are a part of Issued shares. Let’s gossip, how?

Companies have issued shares, those shares were bought by the investors who are now shareholders of the company. Because of various reasons, companies can repurchase their shares from the shareholders through a corporate action called ‘Share Buyback‘.

The repurchased shares or bought back shares by the company are known as ‘Treasury shares’.

Outstanding shares are issued shares that aren’t bought back by the company; this means they’re still in the market and held by various shareholders that we have mentioned semi-recently.

The outstanding shares – held by the promoters, angel investors & venture capitalists and other major investors – which are not available for trading in the stock market are known as restricted shares.

Shares that are available for trading on the stock exchange are known as Free float, Public float or Floating shares. All investors, like retail investors, HNIs, institutional investors etc., who trade in the stock market are holders of these shares.